Welcome to NewsBits where you'll find the database and developer news that you need for the week ending October 13th:

These are your NewsBits:

Scylla 2.0: Ahead of the Scylla Summit at the end of the month, ScyllaDB has released Scylla 2.0. The latest release of the high-performance, Cassandra compatible database supports atomic counters, row caching and heat weighted load balancing. Those features are joined by experimental support for materialized views that can help reduce denormalization and increase overall efficiency. Those are some big features - it's aimed at production with Scylla 2.2, according to the roadmap along with secondary indexes.

CockroachDB 1.1: Back in May CockroachDB hit version 1.0 and now, just over six months later CockroachDB 1.1 has arrived with faster data migration from other databases, simplified cluster management, and improved performance. And lots of changes including a host of information viewing commands, a new array type, and a new UUID type.

JanusGraph: The vote on the release of JanusGraph 0.2.0 is open. As is Apache methodology, the release of the graph database needs to be agreed on between developers, and as 0.2.0 is now 100% done the vote to confirm its release is open. If it goes affirmatively, it should all be official shortly after the 18th.

Updates: Smaller updates for Elasticsearch and etcd have popped up. The release of ElasticSearch 5.6.3 with various small fixes and Kibana 5.6.3 with improved dashboard importing continues the regular updates to what will be the last of the 5.x series. Etcd 3.2.9 was tagged and released, now built with Go 1.8.4 and a fix to the crypto package.

PostgreSQL: In non-release bits, over at Citusdata, some great reads on how to Customize your psql shell so that it is more informative and what happens when you Index all the things - they do it so you don't have to - seriously, don't do it.

SQL: Designer of SEQUEL, which became SQL as we know it, Don Chamberlin talks about the genesis of the query language, the early papers, System R and beyond in an interview with Mapping The Journey.

Node 8.7.0: Node is veritably tearing through the version numbers and Node 8.7.0 is the latest release to arrive this week. We also saw reinforcement of how important Node is for V8 with this tweet:

With 8.7.0, there's updated libuv, V8 and npm and a "fancy new macOS installer" along with the numerous bug fixes, test updates and doc changes.

Rust: Rust 1.21 has landed with some minor tweaks to the systems programming language, parallel translation and LLVM compilation, a Rust Language Server preview for supporting IDEs and editors, and more stabilization and improvements throughout the Rust ecosystem.

Git Exploding: Here's an interesting phenomenon - a tiny Git bomb. It's a repository which will blow up when you try to check it out bringing your machine or processes to their knees. Kate Murphy shows us how it works, giving a peek into the internals of Git, and talks about how to make your own Git bombs. So now, can you trust your repositories? A question that sort of segues neatly into....

Grafeas: Grafeas is a new project from a group comprised of Google, Aqua Security, Black Duck, CoreOS, IBM, Red Hat, and Twistlock. It's all about managing software supply chains from repo-to-container and making sure people know what's been checked, assured, audited and verified without turning it into a huge paperless stack of forms. Shopify has been using it along with Google's Kritis, a Kubernetes policy engine which turns Grafeas metadata into acted on policy.

Terraform Calendars: This rather wonderful terraform-provider-googlecalendar by Seth Vargo at Hashicorp ingeniously lets you use Terraform to create a calendar like code and automate around that. Vargo doesn't think it's a good idea but, I wonder if we'll see cloud deployments set up their own maintenance and review meetings in the future. Check your calendar now, it may already have happened.

iPhone OTA: The last part of Google's Project Zero Over The Air hack has been published. Part 3 takes the Wifi hacks from Part 1 and part 2 which got them access into the iPhone 7 and digs away to get access... to all the devices memory. All the vulnerabilities have been fixed in iOS 11 (if you wanted a really good reason to upgrade) but more usefully the articles give insight into the complexity of defense and attack present in many modern devices and how it both can be improved. 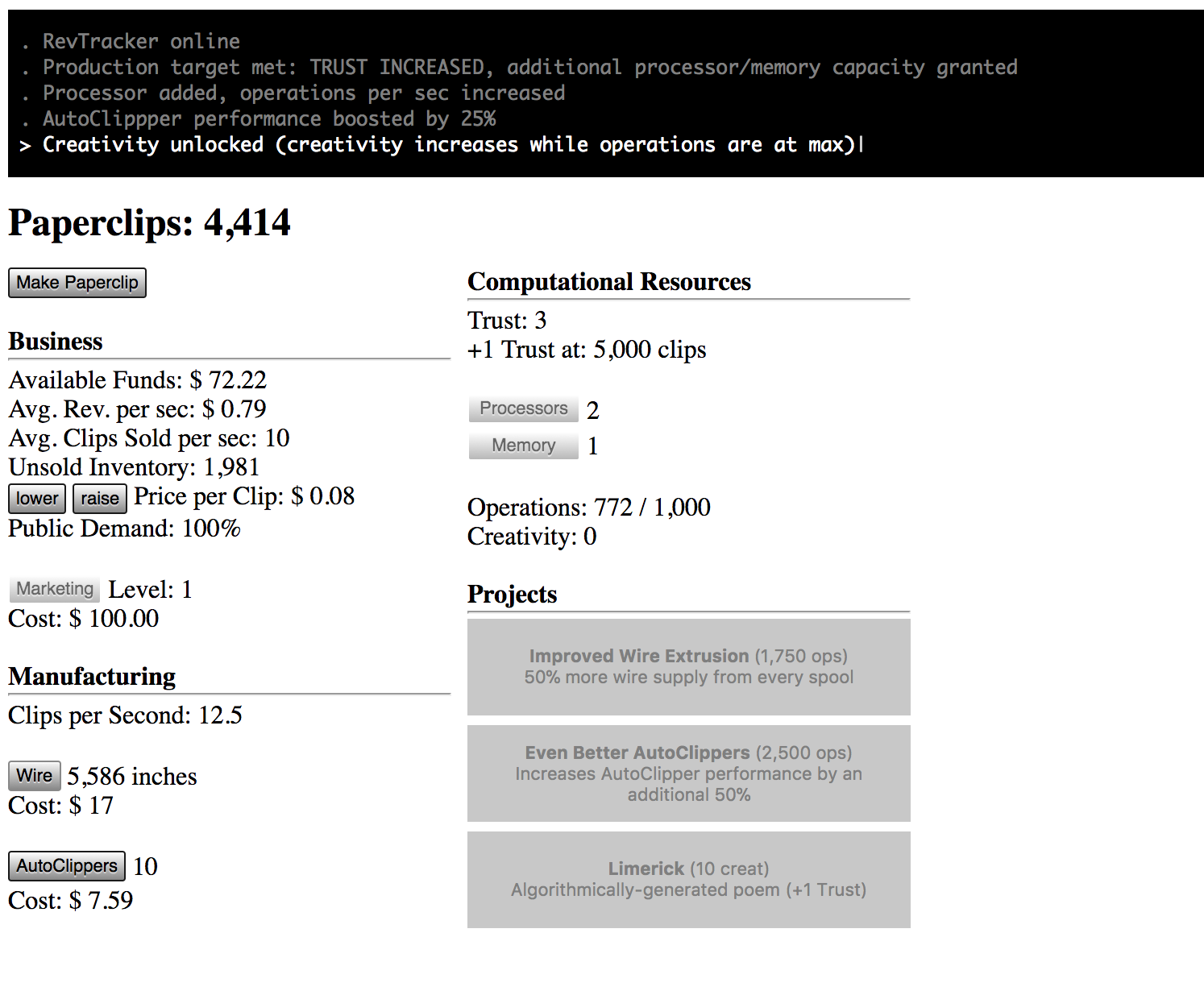 And finally - Considering a new career? Why not become an AI who makes paperclips? Try Frank Lantz's Universal Paperclips and see if you can master the manufacture and marketing of paperclips.

It starts simple and steadily demonstrates something about markets. No responsibility for the time consumed by this simulator is taken by NewsBits...

NewsBits. News in bits, every Friday at Compose.

Read more articles about Compose databases - use our Curated Collections Guide for articles on each database type. If you have any feedback about this or any other Compose article, drop the Compose Articles team a line at articles@compose.com. We're happy to hear from you.