Welcome to NewsBits where you'll find the database and developer news from around the net for the week ending September 14th.

Here's those bits in full...

Rethink Reboot - RethinkDB has a new administrator, the creator of the RebirthDB fork. Over the past months, things have been extremely quiet on the RethinkDB front. The project seemed to have stalled, so much so that a fork, RebirthDB emerged which began work on creating a beta release on 2.4.0. Now, the Rebirth team are working with the RethinkDB project having been given admin access.

Over the last few days a number of drivers have been updated or moved into the official repository -TypeScript, Elixir, Rust - while the Go Rethink driver's been renamed to rethink-go and also joined the official repository. It's too early in the process to see if this will unstick the project but we wish the new team the best of luck.

PostgreSQL 11 JIT - One of the big features of PostgreSQL 11 is the new Just In Time compiler for queries. This allows expressions and tuple deforming to be converted to native machine code on the fly when enabled for better performance. But how much better? Dimitri Fontaine at CitusData took the PostgreSQL JIT out for a benchmark and the results are impressive.

The TPC-H Q1 query is executed 29% faster in PostgreSQL 11 with JIT than PostgreSQL 10. The benchmark itself is open source if you want to see look deeper into what it is exercising. It already, though, looks like the JIT is going to be another performance win for PostgreSQL.

pgAdmin 4 version 3.3 - Now switched to a monthly update schedule, pgAdmin 4 version 3.3's release notes includes various bug fixes and one really interesting enhancement - a geometry data viewer. This lets the data editor render results over a blank space or a map. You can find the details in the Edit Grid documentation (just scroll down to "Geometry Data Viewer").

The "Master/Slave" Issue -The discussion about the use of the master/slave terminology in Redis, took an interesting turn. Initially rejected by Redis creator Antirez, he reconsidered his position and announced a compromise plan. The problem is that Redis is rightly proud of its backward compatibility and to change the "slave" term would affect that as it is embedded in commands and responses. Antirez is setting out to replace "slave" with "replica", but leaving "master" in place - "master/replica". Initially this will be done by adding aliases to commands. In the longer term, there would be a removal of the term but no date is set for that and it would likely be at the same time that there was other breaking changes to Redis.

Alpine - Alpine Linux is a popular lightweight, security-oriented distribution of Linux which has become widely used as a base image for Docket containers. Alpine 3.8.1, just released, closes a recently discovered remote code execution hole. If your containers rely on Alpine, the recommended course of action is to update and rebuild them.

OpenSSL 1.1.1 - TLSv1.3 is the highlight of OpenSSL 1.1.1, the new LTS release of the ubiquitous encryption library. TLSv1.3 is the latest version of what started life as SSL - it has less round trips to get a connection started, an option to start sending encrypted data early and has better security thanks to a cleaning out of obsolete and insecure cryptographic algorithms.

The 1.1.1 announcement covers all the enhancements, beyond TLSv1.3 too. There's a rewritten random number generator, support for SHA3, SHA512/224 and SHA512/256 and other new algorithms, better side-channel attack security and a new STORE module to make retrieving keys and certificates easier. The developers are recommending users upgrade as soon as possible; the previous LTS release, 1.0.2 will be supported till the end of the year, with security fixes only for 2019.

Hack solo - Once there was HipHop, a PHP compiler by Facebook. That project evolved into HHVM, an open source virtual machine for PHP. Then that project developed Hack, a language that ran on the HHVM alongside PHP. Well, now, Hack is taking over as HHVM ends support for PHP. Version 3.3.0, due in December will be the last PHP supporting version. Version 4.0 will land in January 2019 and drop PHP support completely. The Facebook Hack developers are planning to aggressively develop the language rather than the user base over the next few years as they focus on Facebook's development process and demands. PHP users of HHVM are directed towards migrating to PHP7, which addressed many performance issues with the language.

Helidon - Oracle have launched a new open source framework for making Java Microservices. Dubbed Helidon, Greek for Swallow, it builds around Netty for the reactive servicer and adds security and config modules to make Helidon SE. Helidon MP is a layer on top of Helidon SE which adds Eclipse Microprofile support. There's more details in the Helidon announcement for the Apache licensed framework and examples of SE and MP use.

Rust 1.2.9 - The Rust developers are getting ready for some big features in the next versions of Rust. The new 1.2.9 Rust release focuses on making Rust's cargo better so you get help fixing and finding problems. 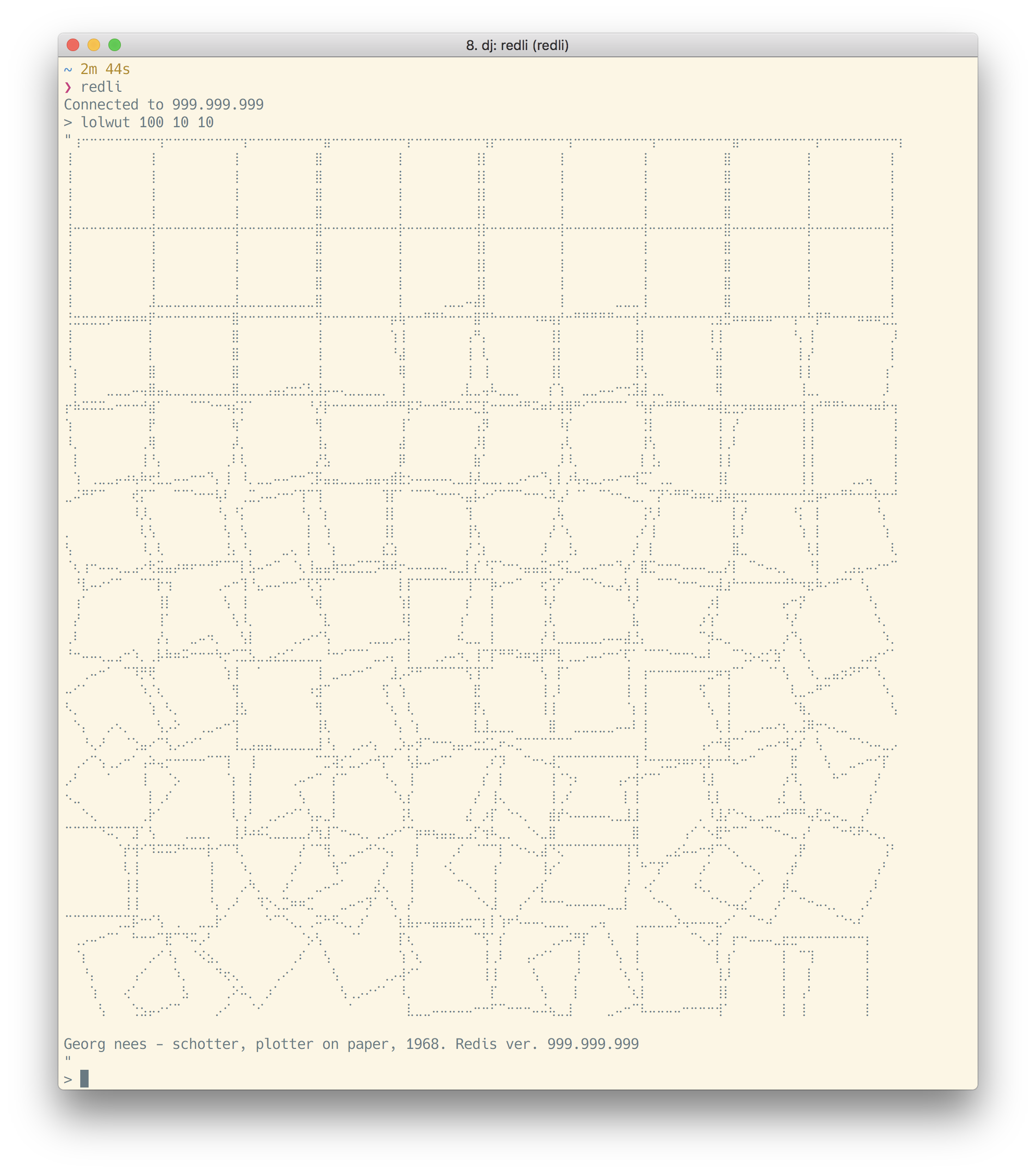 In a break from all the other Redis issues, Antirez, aka Salvatore Sanfilippo, added a non-database feature to Redis. LOLWUT? It's a new command which does... something. In this first iteration, it creates some computer art based on the Schotter, an art work by Georg Nees, from the Redis command line using the Braille unicode set. LOLWUT is, says Antirez, going to be a new Redis tradition starting from version 5 with something new, technologically non-useful, fast and entertaining implemented under the command in each major version. We were entertained enough to build the current unstable branch of Redis and give it a go with Redli, our open source Redis client.

NewsBits. News in bits, every Friday at Compose.